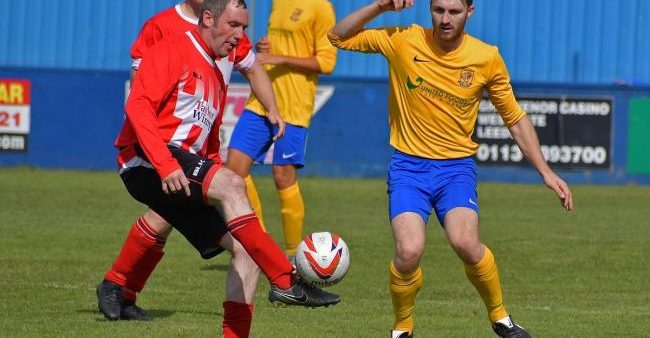 ALBION Sports’ poor start continued with a miserable 4-1 home defeat to Goole AFC, a result which sees them slide into the relegation zone of the Toolstation Northern Counties East League Premier Division. It was the visitors who started last night in the bottom two, but they showed no sign of their early season struggles by racing into a 3-0 lead after 25 minutes.

They added a fourth halfway through the second half, before Albion added a late consolation. They will hope to respond with a weekend win at mid-table Staveley Miners Welfare.

Campion’s prospects are looking far rosier and they moved into third spot in Division One with an easy 3-0 victory at home to Rossington Main last night.

Calum Ward put them ahead early on, before Scott Eastwood’s penalty made it two in the 72nd minute.

Jahro Parchment added a third late on and they will expect another win at home to 10th-placed Armthorpe Welfare on Saturday.

Meanwhile, Andy Briggs scored twice as Steeton came from behind to beat Chadderton 4-2. Tom Leach and Ben Richardson also netted, and the win moves Steeton up to eighth before their trip to St Helens on Saturday.

A couple of cup wins over Pontefract Collieries and an important league win against Mickleover Sports have got Farsley Celtic’s season back on track.

They will hope to end a strong September with an Evo-Stik Premier Division win at home to second-bottom Matlock Town this weekend.

Picture : Albion (in yellow) were comfortably second best as they crashed to a dreadful home defeat against Goole AFC