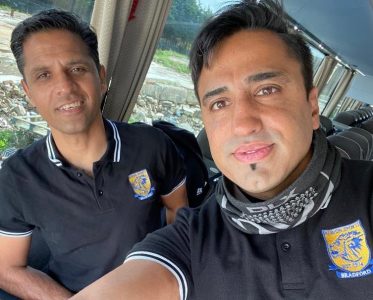 Hussain and Pav Singh have had to start from scratch, but in a short space of time they have assembled a strong squad. Old Albion favourites from Danny Facey, Charlie Flaherty and Alex Cusack are among those who have been persuaded to return and they are joined by other experienced NCEL players such as Andy Cooper and Niall Heaton and a band of talented youngsters.

arly results have been positive, with Albion beating local rivals Campion in the FA Cup before a goal-less league draw with Thackley and the 6-2 battering of Bottesford Town yesterday so understandably Hussain is delighted.

“Myself and Pav were asked to come in and take charge and both of us have worked in academies. We both played for Albion back in the day and both of us had connections within the Bradford community. The club felt needed its identity back and have players from Bradford.

“We started our training sessions and we opened it up to absolutely anyone. We weren’t just going to invite players, we said ‘let’s open it up and get the community on side and let’s see what comes through the doors’. We had a massive response and slowly overtime we whittled it down to form a squad.

“But when the players were coming in one by one, we said ‘you know what, there’s a decent team forming here’.

Even in the last two or three games we’re still not quite there and we’re still hoping for two or three additions. But it is a very bright start by a brand new team. For the younger lads it has been an immense start.

“There’s four or five lads in there who have not played at this level, but they’ve just taken it and you have to praise the experience lads for helping them along. We have a spine of good and experienced players mixed in with good young players

“Some of the players were nine-or-ten when me and Pav first started coaching them so we had an affinity to some of these players who used to be in the academy system.

“They’ve now come back to us. The older players had played for Albion in previous years and had left for whatever reason and they wanted to come back because they had heard about the vibe at Albion and wanted to be part of it.”

Hussain and Singh are a throwback from the club’s greatest period. Before becoming a Saturday team over ten years ago, Albion were one of the top Sunday sides in the country. The joint managers were key players as legendary manager Kully Sandhu guided them twice to the FA National Sunday Cup Final in 2000 and 2005 and Hussain says the atmosphere feels like the old days.

“There’s a good vibe and it has been one of the big pluses,” he said.

“The fans who have all been watching over the years feel the same, especially when we have been away in the FA Cup when we have gone on the coach.

“The place has been buzzing and I remember talking to Pay and we were saying it reminded us of when we used to play in the Sunday League and we got to the National Cup finals and went to places like Liverpool (Anfield). It brought those memories back.

“It was a period where we had to build for as well as we had a couple of lean years prior to that. The Football Club worked hard trying to get players and we had a hardcore of eight players who regularly played. We gelled and we had a sprinkle of magic here and there.”

Everything clicked for Albion on Saturday as they ran riot by putting six past Bottesford. Danny Facey got a hat-trick, with Ben McCready, Niall Heaton and Finn Donovan also chipping in. Hussain admits goals have been the only missing aspect of previous games.

“FA Cup, first game against Campion, what an atmosphere that night,” he said

“It could have gone either way. We felt whoever would score first would end up winning it and we got a bit of luck that we needed it right at the end.

“When you look at the Thackley game, another local derby. We know when you play your local derbies, your performance levels from previous games go out of the window. It is who wants it more on the day.

“For the Bottesford game we just asked the lads to build on what we have been working on for the last few weeks. We have a lot of young lads across the back line and we have shown a lot of resilience.

“We haven’t conceded a lot of goals, but we hadn’t scored enough. That was the big thing we looked at in the training session. We spoke to the lads before the game and we said ‘look we need to start getting some goals to boost our confidence. It worked for us.

“We got six, but in all fairness we had two one-on-ones and we missed a couple of half-chances. It could have easily been ten. Early on we were good and then we had a spell where we wobbled for a bit, but we managed to contain ourselves.”

Hussain also admits his partnership with Singh, who used to be Sandhu’s assistant manager, is working well.

“Both of us have grown together through school so I’ve known him since we were kids,” he said.

“I’m only a few years older than him. He went into coaching earlier than me and he was the one who encouraged me to get into coaching.

“We always stayed in touch when we were at different academies and we used to meet up and talk about football.

“There’s a good mix with us two. I know a lot of the lads in the lower leagues because that’s where I carried on playing whereas Pav already had connections with players from the level we are at because he had worked with Kully for a few years.”

If you have enjoyed reading Non League Yorkshire over the past few months, please consider making a donation to the not-for-profit organisation NLY Community Sport which provides sport for children and adults with disabilities and learning difficulties. CLICK HERE to visit the JustGiving page. There is a video at the bottom of the page showing our work.

NLY Community Sport, run by James Grayson and Connor Rollinson, has always had combatting social isolation at the top of our objectives when running our Disability Football teams. As we slowly return to ‘action’, our work will play an important role in reintroducing our players, who have disabilities and learning difficulties, back into society.

We have enjoyed great success over the past three years. Several of our players have represented Mencap GB in Geneva, including Billy Hobson from Selby and Greg Smith, whose story is quite inspiring.

Like most organisations, we have been affected financially by the Coronavirus and because of the cancelled Lucille Rollinson Memorial Tournament, we are down on projected income for the year and we have incurred losses in the last few months.

We have not been hit as badly as other organisations, but we do need raise £2000 to put us back at the level we were at in mid-March and enable us to make a difference once again to our players’ lives in the future, without having financial worries. Several of our players are suffering from effects of the lockdown and we are determined to be in the strongest position possible to provide services for them.