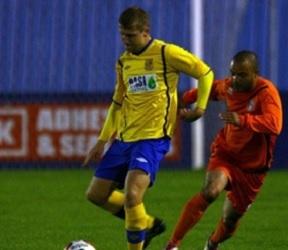 LAST week, frustrated Eccleshill United boss Lee Elam said we would have to speak to Sam Bradley himself about the defender’s shock move from the Eagles, just a few months after rejoining, to Albion Sports.

So that’s what we have done, and the centre back revealed that he will be joined at Albion by Eccleshill’s captain Aran Basi, although not just yet.

Talking about why he decided to make the switch, Bradley said: “From speaking to Albion, and then speaking to Lee, I felt as though Albion would be a better fit for where I am in life now, and ultimately, that’s what swayed my decision.

“I believe I handled the whole situation in the right way and I wish Eccleshill all the best for the future.

“It was one of the hardest decisions I’ll make in football and one that I didn’t take lightly.

“Adrian Benson (Eccleshill’s chairman) and Sally Smith-Butler and Jay Butler (Eccleshill’s owners) have been absolutely brilliant and handled the whole situation very professionally, it has been a pleasure playing for them.

“I wish Lee all the best and I am very grateful for the support he gave me when I rejoined the club.

“It is a real shame that he chose to handle my decision to leave the way that he did but that is all that needs to be said on that.”

Basi is heading in the same direction as Bradley, but clubs are not allowed to take two players from one club at the same time.

The Eagles skipper tried to get around it, but Bradley says Elam would not have it.

He said: “I’m sure everyone knows by now that my best mate Aran Basi has decided to leave Eccleshill as well and join Albion.

“Aran asked Eccleshill to de-register him so he could play straight away for Albion, but Lee said he wouldn’t be doing that. It means Aran can’t play for for Albion until 28 days after my arrival.

“At this level or any other level, why should someone be punished for wanting to move clubs? We all ultimately just want to play football.

“I know Lee’s frustrated, I understand that. But at the end of the day people move on in football.”

Asked why he chose to leave Eccleshill in the first place, Bradley admitted: “It was mixture of things really.

“I always wanted to give Eccleshill a chance over any other team first as it’s where I had my most successful years.

“I had a few offers from other clubs in the summer but signing with any other team than Eccleshill didn’t really cross my mind.

“But I found once I rejoined the club that too much had changed. Apart from a couple of players, the whole (2017-18) promotion squad had moved on.

“In my opinion football at our level is, of course, about winning but the most important thing is to enjoy yourself.

“Many of my old team mates play at Albion, such as Andrew Cooper, Charlie Flaherty, Kamron Basi, Alex Cusack, the list goes on.

“I know I will be happy playing alongside these lads and I know as well as on the pitch, I will enjoy my time off the pitch.”

He added: “The attraction from Albion has been on the radar since the start of the season if I’m being honest.

“Albion is my old club, where I started my semi-professional football career, and Channy Basi (the new chairman) and the whole board are wanting to bring that old Albion feel back.

“I believe with the lads here at Albion, we can only grow and take the club in the right direction.

“Pav Singh and Ishy Hussain (the joint-Albion managers) were key in bringing myself and Aran back to the club too.

“Pav has coached me throughout my career from college and he even used to be my neighbour, so I know how much he can bring me on as a player and I’m looking forward to progressing under his coaching.

“Ultimately, the chairman, the board, the managers, the people around Albion, my old team mates and my best mate are at Albion. It’s a no brainer when you think about it.”